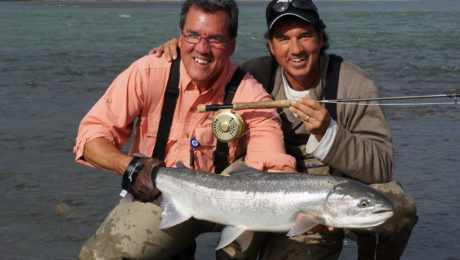 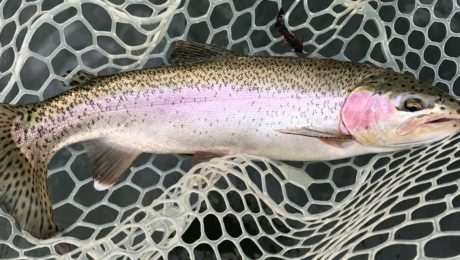 British Columbia’s lake stocking program plays an important role in the provision of freshwater fishing opportunities within the province. Annually, about eight million trout, char and kokanee are released into 800 lakes located throughout the province. The angling opportunities created on these stocked lakes make up over half of the total angling effort expended fishing in freshwater each year. The majority of stocked lakes are located in the rural interior regions of the province and the fishing activity on these waters provides significant economic input into local economies. Fishing resorts, hotels, campgrounds, grocery stores, gas stations, tackle shops, angling guides etc all benefit from lake stocking programs.

The Freshwater Fisheries Society of BC (FFSBC) delivers the provincial stocking program in partnership with the Ministry of Environment. Provincial fisheries biologists are responsible for the management of recreational fishing opportunities and do so through the development of regional and lake specific management plans. Stocking rates and species or strains stocked are matched to individual lake physical and chemical characteristics. Other parameters considered include the presence of competitor or predator fish species, type of access, distance from major population centres and the management goal for that lake. For example, lakes can be managed for family fishing, general or regional fishing or quality/trophy fishing opportunities. Specific fishing regulations are then added to complete the management plan for individual or groups of lakes. Fisheries biologists work with FFSBC research staff to regularly assess the performance of stocked fish in lakes located throughout the province.

Rainbow trout are the most common freshwater game fish found in the province. The distribution of most freshwater fish species including rainbow trout in British Columbia is largely a result of the last glaciation event. As glaciers receded, rainbow trout and other fish species were able to move from other glacier-free areas located south of BC and establish populations in newly created lakes and connecting rivers. Populations of fish then evolved and adapted to their new environments. Feeding, rearing, spawning behavior and physical appearances were all developed over literally thousands of years.

The first organized government stocking programs got started back in the early 1920’s. Those first lake stockings concentrated on the many fishless lakes that were located close to populated areas. Today, many of our most popular interior trout fisheries are a result of a long history of stocking initiatives.

Rainbow trout make up approximately 75% of the total number of fish stocked in the province each year. The FFSBC currently utilizes three major strains of rainbows in delivering the provincial stocking program. Two strains, including those from Pennask Lake and the Blackwater River are classified as wild populations. The third strain is the Fraser Valley stock which is a domesticated or captive brood population. Each of these strains of rainbow trout possesses unique attributes which are considered when developing lake management plans. In some cases, only one strain may be appropriate while in other situations any strain would sustain or enhance angling opportunities. Factors that determine the strain deemed most appropriate for a particular lake include a number of physical, biological and fisheries management parameters.

Pennask Lake is situated approximately 55 km northeast of Merritt on the Thompson Plateau. It is accessed via highway 97C and the Bear Creek Forest Service Road network. Pennask Lake supports a large population of relatively small, wild rainbow trout that are the only fish species found in the lake. Pennask is a large waterbody with numerous islands and rocky outcroppings mixed with shallow bays with extensive lily pad growth. The major inlet stream is Pennask Creek and it offers many kilometers of prime trout spawning and rearing habitat. The FFSBC operates a seasonal egg collection station on the creek and each year collects up to several million rainbow trout eggs.

Pennask rainbows do well in small, relatively productive or nutrient rich lakes such as those commonly found in the interior regions of the province. This strain of rainbow prefers to eat invertebrates like shrimp and leeches or aquatic insects which means frequenting the shoal or shallow areas of the lake. Pennask rainbows are renowned for their strong fighting ability that is often accompanied by several acrobatic jumps. They do best in monoculture lakes (lakes where they are the only fish species present). Although they do not grow large in their native waters, they can grow to tremendous sizes when stocked into highly productive interior lakes that provide long open water growing seasons. Pennask rainbows are best identified by their relatively light spotting that is typically concentrated above the lateral line. In some lakes the spotting is almost absent which results in those fish resembling bright silver bars. The majority of lakes stocked with the Pennask lake strain are in the Thompson/Nicola, Cariboo, Kootenay and Okanagan regions of the province.

The Blackwater River originates in the Ilgachuz mountains near Tweedsmuir Provincial Park in the Cariboo region of the province. The river travels in a northeasterly direction for over 200 km including though several lake systems before entering the Fraser River near the city of Quesnel. The river supports a very robust population of wild rainbow trout, Northern pike Minnow and several other non-game fish species. Early investigations into this strain of rainbow trout found that they were very aggressive feeders and showed good growth rates when stocked into small lakes with a multi-species forage fish food base. Blackwater rainbows spend a lot of time feeding in the shallow water or littoral zone of lakes and that coupled with their aggressive feeding behavior have made them quite popular with anglers. Appearance wise, Blackwaters are much more heavily spotted than the Pennask rainbows although the majority of spotting is still above the lateral line. Once hooked they tend to fight deeper in the water column however they will also take long runs as well as provide some spectacular aerial displays. The Fraser Valley strain of rainbow trout was brought into the provincial fish culture program in the early 1960’s when progeny were purchased from a Washington state hatchery. Fraser Valley rainbows form the basis of the catchable trout stocking program in the province. They are fast growing, aggressive feeders that are easily caught on all types of angling gear. Spawning populations of these rainbows are held at provincial hatcheries and their offspring are grown to catchable size which are generally in the ten to twelve inch range. These fish are typically destined for urban lake fisheries located primarily in the lower mainland and southern Vancouver Island areas. More recently, Fraser Valley rainbows have been stocked in productive interior lakes that are susceptible to or have recently winterkilled. These already catchable sized fish grow very quickly in food rich interior lakes and if they do survive another year or two have the potential to reach easily into the double digit weight range. Fraser Valley rainbows are heavily spotted on the body and tail and when caught from productive lakes will have a very deep and short body shape. They are strong fighters but seldom jump.

Triploid or non-reproductive rainbow and brook trout have been used in the provincial stocking program for almost 20 years. The primary reasons for investing in and developing the triploid technology was for improving specific lake fisheries such as those managed for a quality fishing experience and to ensure the preservation of other native genetic stocks. Triploids are sterile and thus will not hybridize with native populations. Pennask and Blackwater rainbow trout are stocked as either diploids (reproductive) or triploids as dictated by the management regime for a particular lake. Fraser Valley rainbow trout are all released as triploid fish. FFSBC fish culturists have taken the triploid process one step further by developing all female triploid rainbow trout. As the name suggests, these are non-reproductive female trout so the stocking would not include any males. Triploid male trout develop secondary sexual maturation traits including bright spawning colouration and incomplete development of gonads. The triploid males cannot successfully spawn and there is mortality associated with the false sexual development. Stocking of all female triploids eliminates the potential loss of male trout from the fishery. The ideal stocking situation for consideration of triploid rainbows and all female triploids would be a highly productive, landlocked interior lake that has extensive shoal or shallow water feeding areas as well as a good mix of deep water habitat. This lake would be managed for quality fishing experiences and would have regulations such as a reduced or 0 limit, gear restrictions and a winter fishing closure. This scenario would allow the non-reproductive trout the best opportunity to grow to trophy size while still offering anglers a chance to catch and release these fish.

The Freshwater Fisheries Society of BC’s website www.gofishbc.com provides current and historical stocking records for each region of the province. These reports are updated on a regular basis and they can be downloaded for future reference. Each regional stocking report gives information on the waterbody stocked, nearest town, date stocked, species stocked, live stage of fish at stocking, number released and average weight of the fish that were stocked. There are a number of terms and abbreviations used in these reports that need to be understood in order to interpret the data properly. The symbol for rainbow trout is RB. The predominant strains of rainbow trout are seen as Pennask, Blackwater or Fraser Valley and the exact stock released show up as 2N for diploid or reproductive trout, 3N for triploid fish, AF3N for All Female Triploid fish. Rainbows are stocked at four different size ranges. Fry are approximately 6 months old and are generally less than 2 grams in weight. They are typically released in the early fall months with helicopters used to get fish into difficult access lakes. Fraser Valley rainbows are released as either fingerlings or as catchables. Fingerlings are approximately 7 months old and can weigh as much as 20 grams. Catchable Fraser Valley rainbows are the biggest fish raised at provincial hatcheries. They are regularly stocked at weights up to 250 grams or close to one half pound. Pennask and Blackwater rainbows are commonly stocked at the yearling size and as their name implies they are a year old at release. These fish are generally 10 to 20 grams in weight.

Freshwater Fisheries Society of BC research and fish culture staff work with provincial fisheries biologists in continually refining stocking programs as well as working on the development of new strains of trout to fit ongoing small lakes management plans.